How The Cost of Production Applies in The Practical Arena?

My advice to the readers who follow this guide.

This is a report that I created and published with my knowledge and experience in Business Economics of 2nd year 1st schemester. Maybe it’s not a fully completed guide and it may have some errors too.

So, if you are following this try not to use any copy-pasting technique. Also, I have disabled that feature and if you copy something and paste it on your assignments, the result will reduce or cancel the full marks. Because there are so many tools that we can check the plagiarism. So take this content, study, and make a new one with your own words. All prices are in the Sri Lankan Rupees. You can convert them into your currency from google currency converter.

Building a PC for Educational Package 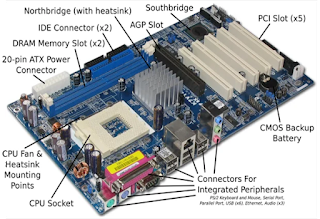 1st step – Take the PC case and install the motherboard

9th step – Close the case and plug in all of the other accessories (power cable, mouse, keyboard, speakers, webcam)

Reasons for incurring this kind of cost

As a company, we need to spend for our production process. When it came to short-run production, we have to face two kinds of cost structures. Those are Fixed cost (TFC) and variable cost (TVC).

What is TFC – Total fixed cost is the cost of the fixed assets that do not vary with production. Examples of fixed costs include rental lease payments, salaries, insurance, property taxes, interest expenses, depreciation, and potentially some utilities.

What is TVC – Total variable cost is the cost paid to the variable input. Inputs include labor, capital, materials, power, and land, and buildings. Variable inputs are inputs whose use vary with output.

Also during the short-run production process, this variable cost will be increased with the production because of the variable inputs.

This is the total fixed cost and total variable cost for some of our production levels.

How to calculate TC / TVC and TFC? 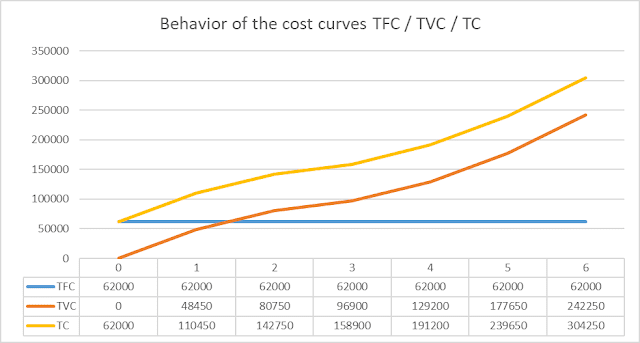 The behavior of the cost curves of short-run

Short-run production of our company depends on the variable inputs and the fixed inputs. Because of we couldn’t able to upgrade our technology and fixed inputs within a limited time.

The behavior of the TFC curve

When we illustrate it graphically we can see a straight line parallel to the horizontal axis. In the short run, our fixed cost is 62,000 RS and it’ll be never increased. This means that the total fixed cost will remain the same even if the firm produces no output or produces at full capacity during the short run.

The behavior of the TVC curve

The cost that increases with the production level is known as the TVC. When the firm isn’t producing anything TVC is 0 (above chart).  According to the above chart, we can see that the TVC curve gets an inverted S upward sloping curve. The main reason for the shape of the TVC curve is the operation of the law of variable proportion. From the 0 levels of production to 3, it’s increasing a lower rate of cost (above MC). Since then, TVC is increasing at a higher rate.

What is the law of variable proportions

the law exhibits the relationship between the units of a variable factor and the amount of output in the short term. This is assuming that all other factors are constant.

The law states that keeping other factors constant, when you increase the variable factor, then the total product initially increases at an increasing rate, then increases at a diminishing rate, and eventually starts declining.

The behavior of TC curve

What are the solutions to overcome the issues of this behavior of the cost curves?

When we consider the above graph, we can see our cost curves (TVC, TC) gets inverted S upward sloping shape. So it’s 0-3 area TVC is increasing a lower rate after that it’s increasing a higher rate. In here we need to clarify one best point for our production process. So we need to illustrate the profit curve for deciding the profit maximization output. In the short run, we will choose the maximum production level which we can achieve with this TFC and the technology to overcoming the issues of this cost curve.

Therefore, the company can operate in a higher profit level (profit maximization output). It’s the Q=5

Below the level of output 0-5 area company incur losses because TC is higher than TR. Then when it came to 6 company earn profits. In the 11th level of output, they can earn the maximum level of profit.

In here, the point where TC and TR will intersect is known as the break-even point (Q= 2.5).

Secondly, we do not know the price per unit of output sold. To obtain price, we will have to divide total revenue by the total output.

Let’s move on to calculate and illustrate the average cost, average variable and average fixed cost of the Educational Package 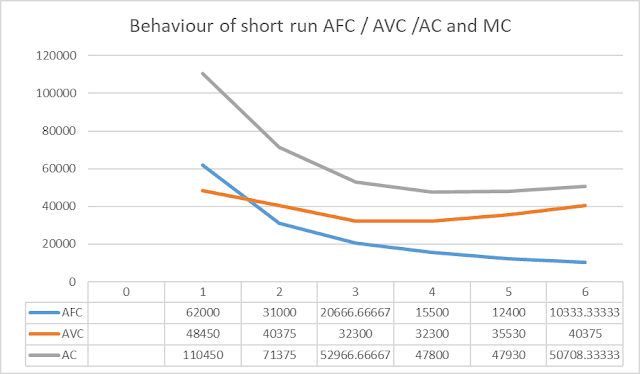 How to calculate average costs?

The behavior of AC/AVC and AFC

In here we can see the cost of one unit of our Educational Package.

Our TFC is RS 62,000 during the short-run production process and also we can’t increase it within a limited time period. Therefore, that TFC will remain to our whole production period in the short run. So, our AFC is illustrated from this amount divided by the level of production. As a result of this, our AFC curve gets a downward sloping shape (above chart). Since TFC is constant, any increase in output decreases the AFC. While the AFC can become really small, it is never zero.

Average variable cost is the total variable cost divided by the number of units produced. So in here, we can see our TVC curve will get a U shape during the short run. Usually, the AVC falls as the output increases from zero to 4. After that, AVC rises steeply due to the operation of diminishing returns.

·         All units of variable factors of production are assumed to be homogeneous.

How to overcome the issues of this behavior of the cost curves?

In here we can understand we were unable to find a suitable point for the company to operate.

To overcome the issues of these cost curves company needs to find the best point for operating their business in the average cost curves. That means we need to find our profit maximization output. 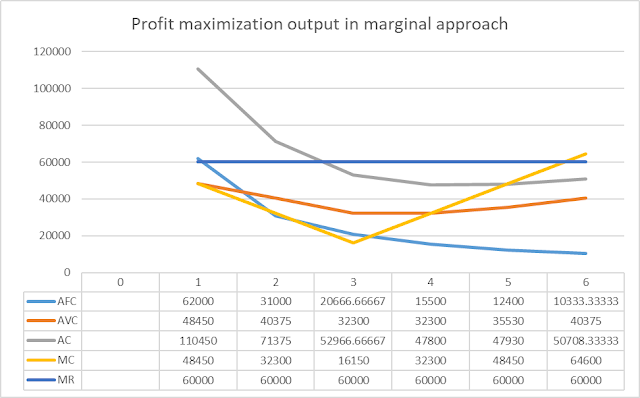 The Profit Maximization Rule states that if a firm chooses to maximize its profits, it must choose that level of output where Marginal Cost (MC) is equal to Marginal Revenue (MR) and the Marginal Cost curve is rising. In other words, it must produce at a level where MC = MR.

Already we were able to identify the behavior of the AC curve. Let’s talk about the MC.

What is marginal cost (MC)

Marginal cost is the addition made to the cost of production by producing an additional unit of the output.

·         From then, our AC curve started to increase. During the period of increasing of AC curve, we can see our MC curve is also increasing at a higher rate than the AC curve. 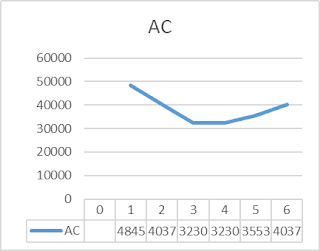 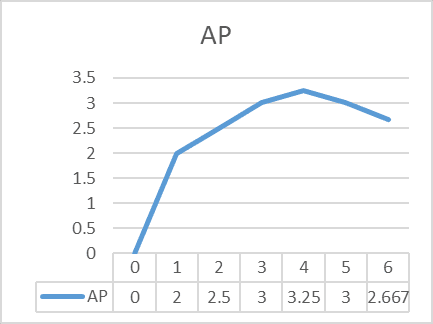 What is the optimum production level?

After once we reach the targets of the short-run production of our company, we were able to upgrade our technology, and also we were able to change and insert more fixed factors to the business. As a result of this in the long run we don’t have any fixed inputs. Because all the factors are variable. Also, the company expects to reduce production costs by improving technology.

·         With the new technical software improvements, we don’t need to buy them.

·         Our market researchers identified there are some persons in the country, who are willing to buy laptops and other computer accessories in the global market like eBay / Ali Express. So company decides to start an online store on eBay.

Is there any relationship between short-run and long-run ATC’s/AC’s?

The simplest answer to this question is yes. Let’s see what is the relationship between short-run and long-run ATC / AC.

In the long run, all costs of a firm are variable. The factors of production can be used in varying proportions to deal with increased output. The firm having a time period long enough can build a larger-scale or type of plant to produce the anticipated output. The shape of the long-run average cost curve is also U-shaped but is flatter than the short-run curve as is illustrated in the above diagram.

The relationship Between Short-Run and Long-Run Average Total Costs shows how a firm’s LRAC curve is derived.

This long-run – LRAC (LAC) curve is illustrated using short-run ATC curves. The shape of the LRAC curve depends on these AC curve. The LRAC curve is found by taking the lowest average total cost curve at each level of output. As of this example when we came to the minimum value of each AC curve (AC1-AC9) we can see the long-run average cost (LRAC) curve.

The reason for this ‘U’ shape of the LRAC curve is the law of returns to scale.

The Law of Returns to Scale

Types of the law of return to scale

Which point would you wish to choose to do the production? 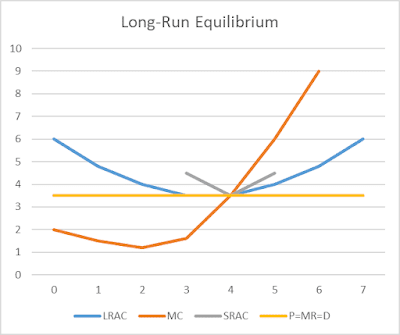 The marginal cost must pass through the minimum point of the average total cost. Therefore, in the long-run equilibrium, price equals three costs.

(The illustration shows the long-run equilibrium in perfect competition.) 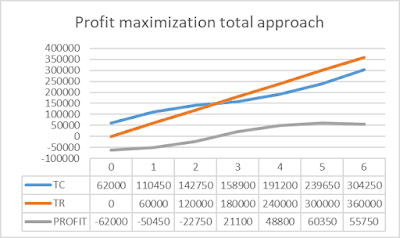 So in here, we can see 0-2.5 production area companies incur losses. Because TR is lower than TC. When it becomes to 3rd unit, the company started to earn profits because TC is lower than TR. But there will be one point for profit maximization. According to these calculations, in the 5thunit of the production company can reach the maximum amount of the profit. So we can identify it as the profit maximization output. 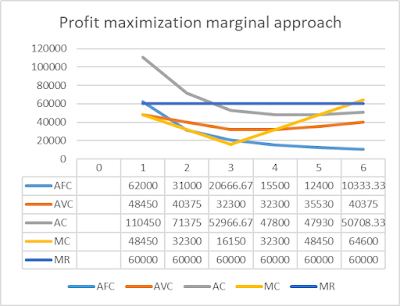 The Profit Maximization Rule states that if a firm chooses to maximize its profits, it must choose that level of output where Marginal Cost (MC) is equal to Marginal Revenue (MR) and the Marginal Cost curve is rising. In other words, it must produce at a level where MC = MR.